Micronesia consists of hundreds of small islands located in the expanse of Pacific Ocean bordered by the Philippines, New Guinea, the Solomon Islands, Fiji, Hawaii, and Japan. It extends east-west between 131º E and 177º E and north-south between 3º S and 28º N. The region?s islands are grouped into various archipelagoes and assemblages. Though all are considered part of a single geographic region, they are diverse, ranging from variously sized and aged volcanic islands, atolls, and uplifted crust and reef. Some of Micronesia?s most familiar islands in include Guam, Saipan, Tinian, and Rota of the Marianas; Palau; Yap, Chuuk (formerly Truk), Pohnpei (formerly Ponape), and Kosrae of the Carolines; Bikini, Enewetok, Majuro, and Kwajalein Atolls of the Marshalls; Tarawa Atoll of Kiribati; and Chichi-jima of the Bonins. The vegetation on these islands is usually lush, resulting from heavy equatorial rains, but lower and more temperate islands can experience significant dry periods.

The ants of Micronesia reflect a complex interplay of biogeographic factors, including the small size of most islands, severe isolation, extensive human contact, and close proximity to hyperdiverse landmasses. An initial survey of all ants collected from this region?augmented with additional collections from Pohnpei?has shown it to be comprised of around 111 species in 37 genera, nearly a quarter of which appear to be single-island endemics (Clouse 2007a, b).

In Clouse (2007a), the ant fauna of the region was characterized as follows:

1) Palau, Yap, and Chuuk as a direct extension of Indonesia (including New Guinea and the Philippines), with high generic diversity, island endemics in Camponotus other than maculatus-group forms, and the presence of certain genera (Calyptomyrmex, Metapone, and Polyrhachis) and species (Pachycondyla luteipes (Mayr), P. atrata (Karavaiev), and Ponera incerta (Wheeler, W.M.)) that may not extend east to Pohnpei or north to the Marianas;

2) Pohnpei by itself as an area containing nearly a full complement of Pacific tramps and pan-tropical invasives, several endemics, but no distinctively western genera [i.e., those mentioned in 1 above and 3 below];

3) The Marianas as a large, highly disturbed area containing common tramps and rare invasives (Ponera loi and Brachymyrmex obscurior Forel), but also endemics of a typically western nature (Cerapachys, Romblonella, and Camponotus); and

4) Kosrae and the Marshalls containing a wide variety of tropical and Pacific tramps but few if any endemics and low generic diversity. The Bonins and Kiribati are currently too poorly collected to be characterized, but key issues for them are (1) whether the Bonin Islands are strongly allied with the Marianas or better categorized as an extension of Japan, and (2) whether Kiribati will demonstrate a blend of Micronesian and Polynesian elements.

Since 2007, collecting efforts in the region have increased, especially in the Republic of Palau and the archipelago of the Mariana Islands. These regions contains the largest islands in Micronesia (Babeldaob and Guam), and their relatively advanced development make them likely entry points for invasive species. The little fire ant, Wasmannia auropunctata (Roger) has recently been discovered on Guam (Raymundo & Miller, in press), and many other new records await publication.

The institutions below helped us to collect, identify, and curate specimens. 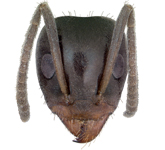 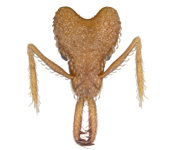 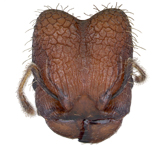