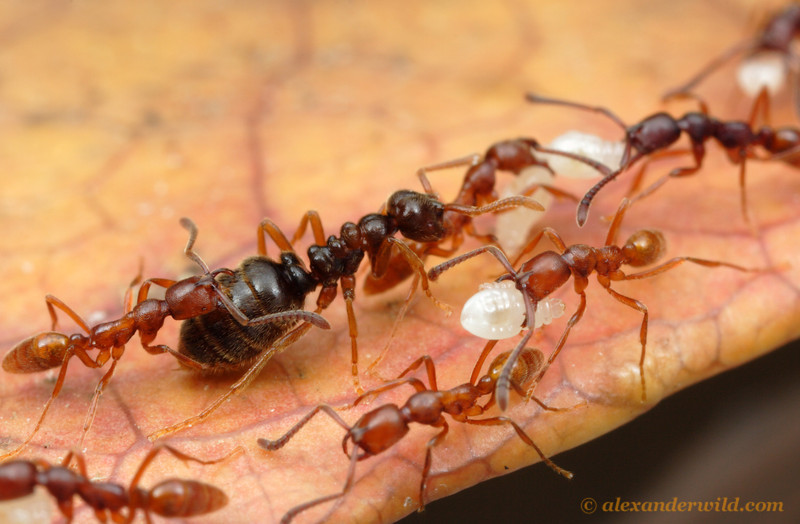 Simopelta sp. nr. pergandei. One of the most remarkable examples of evolutionary convergence in ants involves the ponerine genus Simopelta and the true army ants (subfamilies Ecitoninae,Aenictinae, and Dorylinae). Both groups are specialized predators of other ants, and their queens have a similar morphology. Parque Nacional Henri Pittier, Venezuela.
Image © Alex Wild. // Distribution

Simopelta is common in mid-montane wet forest (500-2000m), and rare or absent in lowland forests (Figure 1). Workers are tolerant of cold wet conditions, and may be observed foraging in cloud forest during inclement weather. They forage on the ground and in the canopy. All my observations of foraging columns have been during the day.

Simopelta has behavior and morphology convergent with Ecitoninae (Gotwald & Brown 1967). Workers forage in dense columns. Raiding columns repeatedly have been observed attacking Pheidole nests, and in one case Stenamma was observed as prey. When colonies are found with brood (their own, not prey), the brood is generally of uniform size, suggesting synchronized brood development. Colony emigrations are encountered with workers transporting brood and the queen traveling with the column, suggesting nomadic behavior. Workers have small eyes, reduced to a single facet. The queen is "dicthadiiform" (permanently wingless, with grossly swollen petiole and gaster) like Ecitoninae.

Nest sites are variable and reveal additional similarities to ecitonine behavior. Temporary nest sites during colony emigrations have been observed three times, twice in hollow dead sticks suspended in low vegetation (Gotwald & Brown 1967 and pers. obs.), and once under a rock. Apparent longer-term nest sites have been observed twice, in extensive chambers in soil. In one of these observations brood was dispersed in various chambers, along with prey remains. It is unknown whether the Simopelta excavated the chambers themselves or occupied preexisting chambers, but the behavior suggests periods of stable use of one nest site, similar to the statary phase seen in Ecitoninae.

Males of Simopelta have remained unknown until recently. Sean O'Donnell recently collected a male in a column of Simopelta workers near Monteverde, Costa Rica, and it is similar to a "mystery male" that Phil Ward had discovered in a Malaise sample from Monteverde. Workers and a piece of the male have been sent to Alex Wild for sequencing, to see if the male is conspecific with the workers.

The genus is known from scattered montane localities throughout the neotropics (southeastern Brazil, Peru, Ecuador, Costa Rica, Guatemala). Given the high diversity within Costa Rica and the possibly restricted geneflow due to non-flying queens, we might expect high regional differentiation wherever the genus is found.

Several features of their biology result in their being infrequently collected. They are most abundant in a spatially restricted and less frequently visited habitat: mid-montane wet forest. Like Ecitoninae, they have large colonies and are low density relative to other ants. They are best encountered not by intensive searching in a small area (typical ant collecting behavior) but by walking trails looking for raiding columns.

Their restricted habitat preference and low density should make them particularly prone to local extirpation from a region. If Simopelta shows great regional differentiation, and the species have narrow geographic ranges, it is likely that widespread extinction of species has already occurred and will continue.

Mayr (1870) established the genus Belonopelta for B. attenuata (type species) from Colombia. Belonopelta curvata Mayr 1887 (from Brazil), B. pergandeiForel 1909 (from Guatemala), and B. jeckylli Mann 1916 (from Brazil) were subsequently described. Mann (1922) described B. deletrix from Honduras, placing attenuata and deletrix in Belonopelta sensu stricto, and curvata, pergandei, and jeckylli in a new subgenus Simopelta. Wheeler (1935) raised Simopeltato generic status, and described new species. Borgmeier (1950), Gotwald and Brown (1967), and Snelling (1975) followed this scheme and described new species. Baroni-Urbani (1975) synonymized Simopelta and Emeryopone under Belonopelta, and placed B. deletrix in a new genus Leiopelta. Brandao (1989) followed Baroni-Urbani's scheme, naming a new species from Brazil. Holldobler and Wilson (1990) resurrected Simopelta and synonymized Leiopelta underBelonopelta. I examined the types of B. attenuata in the Mayr collection and concur that it is clearly related to B. deletrix, and nothing like Simopelta.

Mackay and Mackay (2008) recently revised the genus, but there remain problems with the interpretation of species boundaries in Costa Rica.