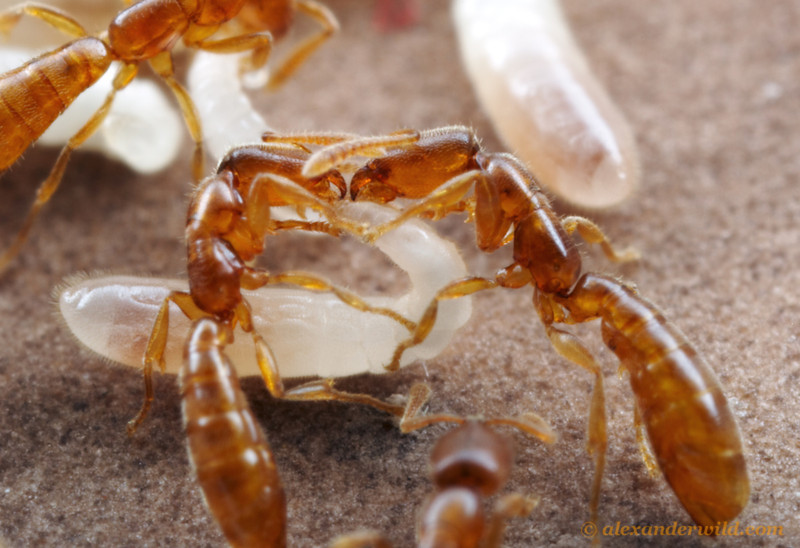 Worker diagnosis (putative autapomorphies of the genus are marked with an asterisk; some of these designations are better understood in the context of the phylogenetic position of AdetomyrmaHNS, discussion of which is deferred to a later part of the paper):

2. Mandibles subfalcate, crossing at rest, and without differentiated basal and masticatory margins (Figs 7, 12); inner margin with relatively few teeth (5 - 6 teeth in the only known species).

3. * Palpal segmentation reduced (palp formula 3,3 in the only known species).

6. Antennal sclerite (or torulus) raised medially, i. e. not horizontal, and fused with the laterally expanded frontal lobes.

7. Frontal lobes weakly developed, only partially covering the antennal insertions in dorsal view (Figs 6, 7), the maximum distance between their outer margins about 14 % of HW.

10. * Metanotum not evident and mesonotum reduced in size, much shorter than the basal face of the propodeum (Fig. 4).

11. Metacoxal cavities tightly encircled by cuticle but the endpoints not fused (Fig. 18); metasternal invagination broad and shallow, extending anteriorly between the metacoxal cavities no more than about one third the cavity diameter.

12. Propodeal spiracle large, circular, in an upper and posterior position (Fig. 24), almost contiguous with the visible upper margin of the metapleural gland bulla.

13. Metapleural gland well developed, the bulla forming a large conspicuous patch on the lower lateral and posterior faces of the mesosoma, below and behind the propodeal spiracle.

14. Metapleural gland orifice (or meatus) opening posterodorsally, near the centre of the bulla, above a posterolateral swelling of the metapleuron (Figs 24, 30); orifice not overhung by a conspicuous cuticular flap nor confluent with an anteriorly directed, longitudinal groove or impression.

15. * Tergum and sternum of abdominal segment 2 fused anteriorly but not posteriorly; tergosternal suture completely obliterated in the region of fusion (Fig. 36).

16. Unfused portion of abdominal sternum 2 triangular, terminating anteroventrally in a well-developed tooth (just posterior to the point of tergosternal fusion), and flanked on either side by a differentiated laterotergite (Fig. 36).

17. * Helcial tergite (pretergite of abdominal segment 3) poorly developed, not set off from the rest of tergum 3 by a constriction, in consequence of which no petiole discernable in dorsal view (Figs 3,4).

19. Helcial sternite narrower than the poststernite of abdominal segment 3, and positioned much higher than it so that a ventral petiolar constriction is seen in lateral view (Fig. 2).

20. *? Helcial sternite strongly bound by connective tissue to the posterodorsal margin of abdominal sternite 2. (In two of four dissections that were performed part of the helcial sternite and adjacent poststernite broke from the rest of abdomen 3 and remained attached to the inside of the petiolar venter; see Fig. 36.)

21. *? Tergum and sternum proper of abdominal segment 3 unfused, but helcial tergite tightly embracing the lateral margins of the helcial sternite and apparently fused with it.

22. *? Tergum and sternum of abdominal segment 4 unfused and without differentiated presclerites.

25. Pygidium simple, with posterior extremity rounded and hood-like, neither denticulate nor heavily sclerotized or otherwise modified.

30. Apical segment of metatarsus enlarged, longer and wider than each of the three preceding segments.

Unique features of AdetomyrmaHNS workers include the weakly differentiated helcial tergite and consequent ape-tiolate appearance in dorsal view; the large and posteriorly expanded gaster all of whose segments are unfused and (except abdominal segment 3) without differentiated presclerites; and the enormous sting which is larger in relation to body size than that of any other ant. Because the valve chamber is not well differentiated from the sting shaft, Kugler's (1978) ' index of sting reduction' (IR = shaft length / PW x 100) cannot be calculated precisely. Nevertheless Adetomyrma has a sting length / LHT ratio of 1.72 - 1.77 and an approximate IR of 190. These values are well above those reported for other ants (Kugler, 1978, 1980, 1991, 1992), the nearest being Amblyopone pallipesHNS with an IR of 119 (Kugler, 1978). The dentiform clypeal setae, absence of eyes, configuration of the metapleural gland orifice, structure of the petiole and exposure of abdominal spiracle 5 are also distinctive features, that occur in this combination in no other known ant.

AdetomyrmaHNS presents a curious mix of ancestral and derived traits. The former include a freely articulating pronotum and mesonotum, unfused metacoxal cavities, a well-developed furculate sting, and an apparently primitive configuration of abdominal segments 3 and 4 (but see discussion below). Derived features include the reduced eyes, mouthparts, and mesonotum; the anterior fusion of abdominal tergum and sternum 2; and the enlarged metasoma. A discussion of the taxonomic position of AdetomyrmaHNS is given after the species description.