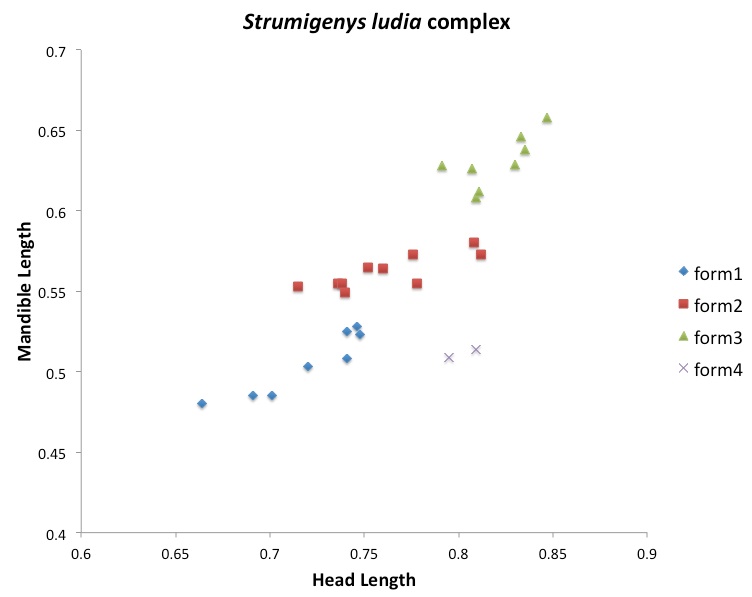 Brown and Wilson (1959) summarize the genus as follows:

Members of the genus are all predaceous, with a kinetic mode of attack (Bolton 1999).

Brown (1962) reports that ludia is a forest species and usually nests in rotten branches or twigs lying on the forest floor. He also reports that the food is chiefly entomobryoid Collembola.

In addition to regular queens there are ergatoid queens that are more robust than workers, with a more developed petiolar node, and with a trio of minute ocelli.

Strumigenys ludia is a complex of cryptic species. There is evidence of two and perhaps three sympatric species in northern Chiapas, Mexico. Clusters segregate on a scatterplot of head length x mandible length. Form 1 is the smallest, with ML < 0.55 and HL < 0.75. Form 2 is intermediate in size, ML 0.49-0.58, HL 0.71-0.81. Form 3 is the largest, with ML > 0.6 and HL > 0.78. Form 4 is large with short mandible, ML 0.51, HL 0.80. Form 1 occurs from second growth lowlands of Chiapas, through the Peten, to west coastal Honduras. Specimens from La Selva also match this form, but the range is divided by Form 2. Form 2 occurs from west coastal Honduras south through Atlantic coastal Nicaragua. Form 3 occurs at higher elevations and mature wet forest in Chiapas, in the Lacandon area, and at Cerro Azul Meambar in Honduras. Form 4 is from just two specimens in one Winkler sample, from a roadside site in the Lacandon forest of Chiapas. The DNA barcodes differ by about 15% between a specimen of form 1 from Honduras and a specimen of form 4 from Chiapas.

Brown's (1954 "1953") concept of S. ludia included forms 1 and 2, based on the range of measurements he reported. Brown's concept also included the junior synonym S. ludia tenuis Weber, 1934. Mann described S. ludia from "Cecilia," Honduras. From the context of the publication, this must have been a site in the lowlands or foothills along the Atlantic coast. Weber's tenuis is from Nicaragua, Tuli Creek, near San Miguel. Both are sites in which forms 1 or 2 could occur, so types should be examined.

Bolton, B. 2000. The ant tribe Dacetini, with a revision of the Strumigenys species of the Malagasy Region by Brian L. Fisher, and a revision of the Austral epopostrumiform genera by Steven O. Shattuck. Memoirs of the American Entomological Institute 65:1-1028.

Found most commonly in these microhabitats: 1 times rocky loam soil, 1 times on orchids.