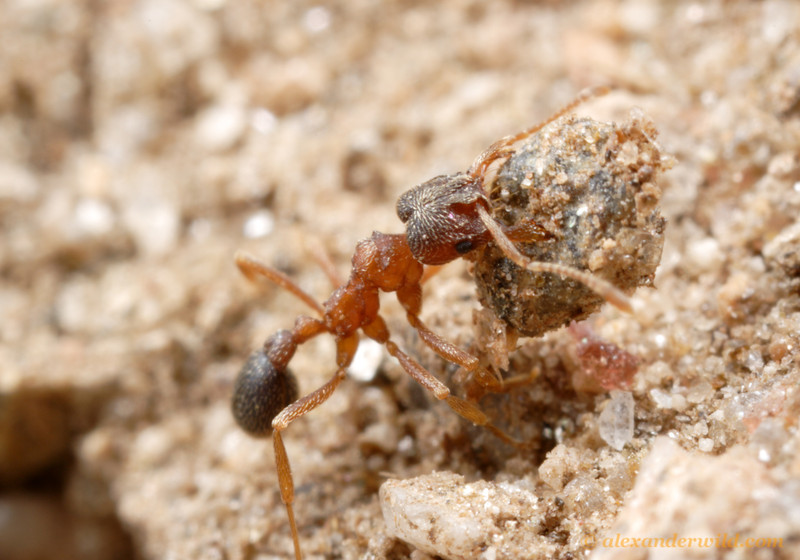 Worker: Monomorphic AttiniHNS ants. Color yellowish to reddish-brown. Body densely sculptured and covered with short, appressed hairs. Head with long flexuous hairs (with the length of the first funicular segment), six fine and stiff setae with the same length as the apical funicular segment forming a psammophore set at the middle clypeal disc medially and at the posterior margin laterally, reaching or surpassing the anterior limit of the mandibles. Masticatory margin of mandible smooth, without any trace of sculpture. Head subquadrate. Compound eyes at anterior half of the head. Mandibles subtriangular. Clypeus triangular with latero-posterior margin strongly produced forward over the lateral wings of the clypeus, as rounded ridges, resulting in large circular areas where the antennal scapes articulate. Frontal lobes reduced, in frontal view forming an attenuated triangle. Antennae 11-segmented, scapes surpassing the posterolateral corners of the head. Mesosoma slender, pronotum without defined spines, dorsal margin in side view almost straight. Anterior mesonotal tubercles vestigial occasionally developed; postero-dorsal tubercles on mesosoma developed. Propodeum armed with a pair of small spines. Petiole without distinct node and postpetiole at posterior portion with a wide impression, dividing the postpetiole in two distinct lobes. Gaster smooth, without spines or protuberances.

Comments: The here described monotypic genus KalathomyrmexHNS; with K. emeryiHNS as the type species, presents the following exclusive set of characters: subquadrate head shape; reduced arched frontal lobes; subtriangular mandibles with five teeth; triangular clypeus with latero-posterior margins strongly produced forwards over the lateral wings of the clypeus as rounded ridges, resulting in two large circular areas where the antennal scapes articulate, junction of antennal insertion area and clypeus with long setae, forming a psammophore (apparently non-homologous with the ParamycetophylaxHNS psammophore and a putative synapomorphy for KalathomyrmexHNS); lack of a median clypeal seta (otherwise universal in AttiniHNS); noticeably slender body; and median dorsal conical protuberance in the posterior area of the mesonotum. Also, in contrast to the species of MycetophylaxHNS as accepted here, the species of ParamycetophylaxHNS and KalathomyrmexHNS females share a morphological character state of the postpetiole with a large posterior impression, almost dividing it into two lobes. Notwithstanding, in comparison with the morphological distinction accepted for AttiniHNS genera, we propose to separate these species in two different genera.

Mycetophylax emeryiHNS (Forel, 1907) is formally excluded from MycetophylaxHNS and here designated as the type species of a genus, KalathomyrmexHNS. We have already discussed that in comparison with other attines, the degree of morphological differentiation of this taxon led us to recognize it as a distinct genus, in particular the seemingly exclusive secondary loss of the median clypeal seta. KalathomyrmexHNS shares with MyrmicocryptaHNS the character state of the antennal insertion area. It is a deep concavity with rounded anterior margin that projects forward, forming a conspicuous transverse and rounded ridge at the juncture with the posterior margin of the clypeus. The transverse ridge extends medially and is elevated anterior to the frontal lobes. However, other characters listed in the diagnosis exclude KalathomyrmexHNS from the genera traditionally recognized as Paleoattini. Hence the situation of the antennal insertions may represent a convergence with MyrmicocryptaHNS.

Schultz & Brady (2008) studied Kalathomyrmex emeryiHNS specimens from Guyana and Argentina, which consistently come together in their molecular phylogeny as the sister-group of the Neoattini, apparently splitting from the other neoattines 40-50 million years ago, being the oldest living lineage in the Neoattini. The species we are including in the monotypic KalathomyrmexHNS is widespread in cis-Andean South America, occurring in all its main ecosystems.