Most of Mississippi lies in the Gulf Coastal Plain physiographic region, with only the extreme northeastern corner of the state in Tishomingo County being found in the Cumberland Plateau. The state can be further divided into 11 physiographic regions or 4 basic ecoregions with 21 subdivisions. Because of its location in the United States, Mississippi serves as a transitional zone between several different regions of the country. Part of Tishomingo County, in northeastern Mississippi, and the loess hills adjacent to the Mississippi-Yazoo Alluvial Plain and extending into southeastern Louisiana share many plant and insect species that occur in northeastern United States. Prairie remnants with a biota including many species disjunct from the Midwestern plains are found in the central and eastern parts of the state. The southeastern region of the state, which borders the Gulf of Mexico, has affiliations with both southern Alabama and Florida, and shares many common species of plants and animals with them. Additionally, with the exception of land cleared for agricultural purposes, or open prairie remnants, much of Mississippi is wooded and has forests ranging from long leaf pine savannas to hardwood forests to cypress swamps.

Thus far, 186 species in 39 genera and 9 subfamilies have been found in Mississippi. As more unique habitats are studied, especially in southern portions of the state, this number will likely increase. Twenty-nine species are considered to be exotic to Mississippi, but only the imported fire ants, Solenopsis invicta Buren, S. richteri Forel, and their hybrid, and the Argentine ant, Linepithema humile (Mayr), have greatly impacted the state and its ant fauna. Although these ants are exceedingly common throughout the state, they thrive in disturbed open habitats, and therefore, natural habitats, especially forested ones, seem to be less affected by their presence. Four other introduced ants, Brachymyrmex patagonicus Mayr, Cyphomyrmex rimosus (Spinola), Pheidole moerens Wheeler, and P. obscurithorax Naves, are now well established and common in southern portions of the state. Nylanderia fulva (Mayr), the tawny crazy ant, has become established in our three coastal counties. Camponotus, Strumigenys, Aphaenogaster, and Pheidole species are all very common in Mississippi, especially in wooded areas, with 28 species of Strumigenys having been found to date, making it the most diverse genus in the state. 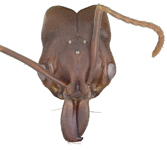 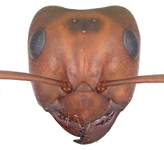 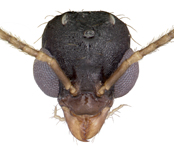 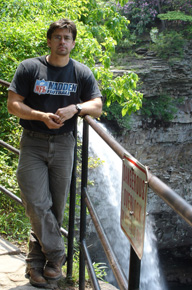 Layton, B. and J. A. MacGown. 2006. Control of Argentine Ants and Odorous House Ants in the Home. Mississippi State University Extension Service, Publication no. 2407. 7 pp.