More species of ants occur in Arizona than in any other state, with the fauna consisting of 8 subfamilies, 43 genera, and 318 native species. This extremely high number of species results from Arizona lying at the confluence of several biotic regions, combined with high topographic diversity (140-12,650 feet) that encompasses areas from hot desert to tundra habitat. On a north-south axis, Rocky Mountain and Canadian faunal components mix with the hyperdiverse neotropical assemblages of the Sierra Madre Occidentale in northern Mexico, while the east-west axis consists of a rainfall gradient across the Mohave, Sonoran, and Chihuahuan Deserts. The numerous isolated mountain ranges "sky islands" of southern Arizona also contribute to high species richness, as exemplified by 187 species occurring in the Chiricahua Mountains of southeastern Arizona. Seed-harvesting ants in the genera Pogonomyrmex, Messor, and Pheidole are prominent in desert habitats, while ants in the genera Camponotus (carpenter ants) and Formica (wood ants) dominate higher elevation habitats. Twelve introduced species occur in Arizona. All twelve of these species are almost entirely restricted to mesic urban and agricultural areas, and none of them is considered a prominent pest. 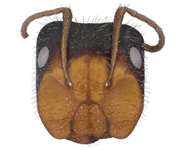 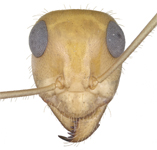 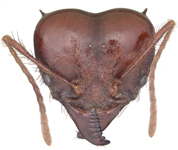