Florida spans almost seven degrees of latitude within temperate and tropic climate zones, jutting out into a warm ocean. Couple this geographic placement with abundant rainfall, and you have a state with a rich diversity of both plants and animals. The Florida Natural Areas Inventory currently lists 82 natural communities identified within Florida, including moist hardwood hammocks, fire-dependant pine flatwoods, dry oak scrub and numerous marine coastal areas. These ecosystems have been influenced for millions of years by the presence or absence of fire and water, forming a patchwork quilt of wet/dry environments.

Spread throughout this diverse mix of habitats and climate patterns are 221 species of ants recognized so far. They inhabit a wide variety of nesting locations including tree limbs and twigs, grass culms, rotten logs, leaf litter, soils of all types, acorns, pine tree bark and even pocket gopher burrows deep underground. This number includes a vast array of dacetines (32 species), common species such as Hypoponera opacior (Forel 1893) and an endemic species of ponerine (Odontomachus relictus Deyrup & Cover 2004). The favorable habitat and climate conditions that exist in Florida also make it easier for exotic ant species to become established, especially when combined with this state's vagabond human population and history of tropical plant commerce. Of the 221 species, 52 are exotic, the largest exotic ant fauna of any U.S. states. A recent arrival, the white-footed ant (Technomyrmex difficilis Forel) has been spreading quickly throughout Florida, often displacing other exotic ants such as the ghost ant (Tapinoma melanocephalum (Fabricius)) within urban settings. 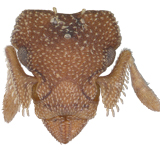 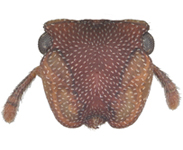 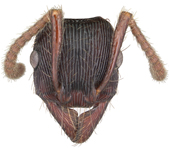