The ant fauna of Queensland, Australia comprises 13 subfamilies, 98 genera, and over 1300 species.

Queensland is the second largest state in Australia spanning 1,852,642 square kilometers. The biomes of Queensland are diverse spanning the largest surviving tract of Gondwanan rainforest in Australia to dry sclerophyll forests to eucalypt open forests to the arid outback. The ant fauna reflects this complex and ancient topography. Due to the geographic size of Queensland there is significant variation in the climate across the state with several climatic zones recognized. Due to the close proximity of northern Queensland with New Guinea many ant lineages are shared with the island.

The ant diversity of Queensland is rich with many endemic species. Interestingly although the rainforests of Australia currently make up only a very small portion of the total geographic area of the continent, ant generic taxonomic diversity is highest in the moist, forested areas nearer the coast (Shattuck 1999) suggesting that not only are these habitats older, but that the rainforest restricted fauna may be some of the most evolutionarily distinct in Australia.

Noet: S. geminata may have been eradicated from Queensland but since new infestations are to be expected, we thought it prudent to keep the species on the list. 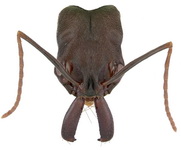 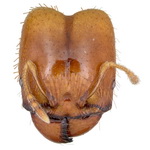